Hello everyone, I said yesterday most of my stuff that I have written in the past has now disappeared off the internet. Most of it that is. But I do have some reviews on GameFAQs, and if I look hard enough, I might be able to find some music reviews too. But for now, I'd like to bring you a review I did on Pokemon Gold and Silver, that I wrote when I was 16. Enjoy.


"Pokemon GnS are great games to play if you are on the road with your Game Boy Color, with no console around." 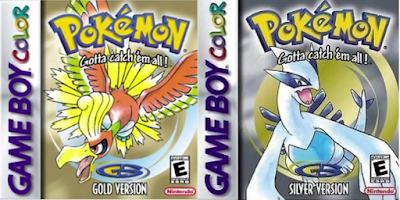 Pokemon was a huge franchise in the late nineties. Pokemon had its own T.V. series, cards, movies and games. After Pokemon Red and Blue came out on the Game Boy in 1996/97, Nintendo had its most successful money-maker since Super Mario. The Game Boy was probably the oldest game system that was STILL selling games over ten years later. However the Game Boy had to meet its end someday, and a new Game Boy came out. The Game Boy Color came out in 1998/99, along with new games now in colour. As Pokemon was possibly the best selling Game Boy game ever, colour versions were made for the new game system. The games were called Pokemon Gold and Silver.
Before I begin, Pokemon Gold and Silver (along with Red and Blue) are two games that are generally the same. The only difference between the two is that certain Pokemon (mystical creatures that can be used as pets or for duelling) can only be found on one game. Certain Pokemon from the Gold version cannot be caught on the Silver version, and vice versa.
Gameplay

Pretty much exactly the same as the Red and Blue versions. Gold and Silver (now being abbreviated to GnS), basically concentrates on one person, a little boy of your choice in name who is starting his journey to become the Pokemon master. You go around from city to city, battling Pokemon trainers and villains and getting gym badges from eight (or sixteen) major cities around the world. After getting all eight gym badges, your little fellow can challenge the Elite Four, the apparent test to prove if you are the best Pokemon trainer in the world.
Each Pokemon (a total of over 250, a bigger number from the original Red and Blue versions, which only had 151) has its own moves, types and advantages as well as disadvantages. You can carry a total of six Pokemon at a time, so considering there is a huge choice of over 250 Pokemon, there is also a good strategy involved in what Pokemon to bring. The strategies don't just end there, as each Pokemon can only carry up to four moves, and a good selection of moves can be learnt as your Pokemon grows stronger. Also HMs and TMs (items that can automatically teach Pokemon moves) are featured in the game, and certain HMs and TMs can only be used on a certain fraction of the Pokemon in the game. So there is a lot of planning involved in this game, and it's fun choosing what Pokemon to use and what moves to give them. Also like the majority of RPGs, Pokemon uses the experience system to level up their Pokemon.

As previously mentioned, the gameplay is pretty much the same as Red and Blue. However it's the same thing, and a little more. There are a few new features involved in the game. The first and most important is the time. You can actually set a time to the game, and set it exactly to the time in your part of the world, and play the game in time with your environment. Or you can set the time to a different time to the real time, it's up to you. The time in the game affects the gameplay a lot, there are secrets and special events that only occur on certain days or/and at certain times. Different Pokemon are around at different times, for example, a HootHoot is an owl Pokemon, and can only be caught at the night time. The time makes the gameplay that much more exciting and strategic.
Another addition to the game is the Pokegear system. Your Pokegear is basically everything you own, in Red and Blue you had your backpack which could hold up to twenty items (if I'm correct… I might need to check into that) which includes Pokeballs, HMs, TMs, and items. Your Pokegear however splits this up into different parts of the backpack, so there is a section for Pokeballs, a section for HMs and TMs, a section for key items and a section for your normal use items. This is a nice little improvement to the game, which helps cure for the limited item storage that was a pain in the previous games. Also featured is a Phone book, which can store numbers of important people and Pokemon trainers you have previously fought. Sometimes old trainers might want to have a rematch, or they might want to just have a chat. Also sometimes if a rare Pokemon appears around their area in a swarm, they will tell you about it, which can be helpful for catching a Pokemon that was not easy to find in that area previously.

To conclude the review on the gameplay, the gameplay is great on GnS, and a large improvement has been made from the previous series. There isn't much bad to say about the gameplay, other than it may become rather tedious after a while. Gameplay: 9/10

Story
The main disadvantage of the Pokemon games is exactly this. There is NO story involved. There is a storyline, but no story, there is no filler involved. Basically you control a boy who wants to become the Pokemon master, catching all the Pokemon, defeat your rival and eliminate Team Rocket. Other than that, there is nothing surrounding the storyline at all. However, to be fair the game does succeed without a story. The fact that there is very little story around makes the game a lot more for kids rather than adults, which is a good thing. A story can put the little kids off, as it may become too complicated to follow for someone at such a young age. It's hard to rate the story, but this is the best I can rate. Story: 7/10

Graphics
2D Game Boy graphics is what Pokemon suits best. The graphics are far from amazing, the Game Boy Color is no computer console, it's a handheld system. For Game Boy Color graphics, the graphics in GnS are top notch. However if you compare them to a game that came out at a similar time, (for instance, Final Fantasy IX) the graphics are terrible. For what it's worth, I will rate the graphics in between the two points above. In a positive way of reviewing, the colour use in the game is used well, and adding colour to a Pokemon game was well worth it. Graphics: 8/10

Sound
The sound in the game is very similar to the previous games. The sound of the Game Boy and Game Boy Color games can be very irritating, as the music is very high pitched, simple, and repetitive. There are a few decent tunes in GnS, and for a GBC game, it's decent. Sound: 8/10

Controls
There are only four buttons involved on a GBC system, and GnS uses the buttons well. The controls are simple and easy to use. There are no flaws involved with the controls for the game. Controls: 10/10

xtras
The best thing about a Pokemon game is the rush to “Catch ‘em all”. Catching all the Pokemon in the game is an extremely long and fun journey to do. The fact that there is about 100 more Pokemon to catch in the game makes the game all that better. My proper opinion on the increasing number of Pokemon in the series, is positive, but goes no further from here. In the first two games, Red and Blue had 151 Pokemon, and the game was great. In this set of games, an extra 100ish Pokemon were added, and this was also good. However Pokemon Ruby and Sapphire (the two games for the next handheld Game Boy) added an extra 130ish, making the total to 380 or so. This in my opinion is going too far, and makes the game a lot more tedious. However back onto GnS, the main extra involved is catching all the Pokemon, and is a great side-quest to conquer. Also battling your Pokemon with other players (via Link Cable) is always fun, as well as trading Pokemon. There is a lot going on in the game that will keep you playing for hours. Extras: 10/10

Challenge
The Pokemon games are generally rather easy, if you know what you're doing. There are no limits to the difficulty however, as the Pokemon you decide to use can either “suck” or “rule”. The difficulty is completely up to you, depending on what Pokemon you use and how well you can use them. The challenge is varied so there is nothing wrong with that. Challenge: 10/10

eplay
Well you might play this once, and keep the game saved. Once you have everything done, the best thing to do then is most definitely battling your Pokemon with your friends. I have mixed feelings other than the point above about the replay value. You might want to play through the game again, or you might want to keep your game once in completion. The game is great, but after going through it once there is not much filler involved that will definitely make you want to play through the game again. Still you might want to, it depends on the person really. Replay: 8/10

This is a great set of games, and probably my favourite of the three sets Nintendo have brought out. If the games came out in the early nineties, the games would mean perfection. However the games came out in 1999, and there are far bigger and better games to play out there. If they somehow could make a decent 3D version for the Gamecube or something, then this game would be amazing. However, Nintendo generally fail to produce a good 3D Pokemon game, as in my opinion Pokemon Stadium and others were nowhere near as good as the Game Boy games, despite the 2D blocked graphics that are involved. Pokemon GnS are great games to play if you are on the road with your Game Boy Color, with no console around. At home however there are better RPGs around that can outdo the Pokemon games. On the whole the games are great, but not the best. Overall: 70/80 = 88% = 9/10
Obviously it's not the best review in the world, I think if I were to re-review the game it would be a much crisper review. But I was sixteen at the time. Any compliments or criticism are appreciated. I'd also like to say please vote on my poll, I'd like a bit of feedback. Have a good day.
For the latest updates on my work, follow me on Facebook and Twitter here!