Hey there. Welcome to the final part in my Top 50 Favourite Mega Drive games list. Every day for the past 50 days I’ve been revealing one game per day, in my biased opinion, my favourite games on this absolutely amazing console. I’ve had a blast, reminiscing over these 49 amazing games. I hope you’ve enjoyed it too, and maybe remembered some games you may have forgotten before, or even, found new games in this list you never heard of, and enjoy. We’re at the end now.

Here’s quick recap of my list from #50 to #2…
Okay then, this is it. My favourite game on the Mega Drive is…

Yes, my favourite Mega Drive game is Gunstar Heroes. I don’t think any game since Gunstar Heroes has been able to compactly put so much chaos on screen while maintaining a decent flow of entertainment. I really mean that. This game has so much stuff going on, you shoot through hundreds and hundreds of bad guys, but it just doesn’t get old, doesn’t get boring, and doesn’t get stale. It’s so entertaining, and the game has a brilliant sense of humour, awesome music and the sound quality is absolutely sublime. This game is so exhilarating it’s incredible. It’s simply one of the most action pumped games ever made and is a thrill to play, even 19 years later. Gunstar Heroes is a game you simply have to experience before you die. It’s such a shame the game isn’t acknowledged more, in comparison to other games in this list. Nothing against those games. But Gunstar Heroes is simply one of the best games ever made, and is my favourite game ever to be released on the Mega Drive.

Well that’s it! We’ve finished! I hope you’ve enjoyed this list, and reminiscing over these brilliant games, games released between 1988 and 1996, the epitome of 2D gaming. I love all 50 of these games and I’m sure there’s something in this list for everyone. If there’s any games here that have given you some great memories, please, comment below. Is there any games on here you’ve never played before and it being on this list made you try it? Let me know, comment below.

If you know me personally, you know I’m a stats guy, and here are two interesting graphs you may like. 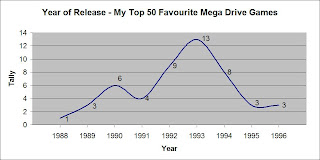 This graph really interested me. I didn’t take into consideration the year of each game’s release until the list was fully complete. The year 1993 having 13 entries out of 50, that’s over a quarter of the list, was an intriguing statistic. It makes sense though. Sonic 1 was released in 1991, and that really set the Mega Drive off to not only compete but to equal Nintendo at one point in the video game wars. Two years later and game after game after game was released that were outstanding. I’m not really surprised that most of my favourite games were released in 1993, but it’s very interesting. If you were wondering, the earliest released game in this list is Super Hang-On, the only game released in the year 1988, and the latest game was Sonic 3D Blast, which was released on November 30th 1996. Nine years of video games. Amazing. 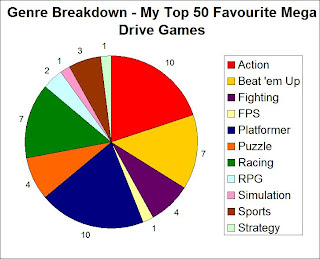 This graph isn’t surprising at all, but it’s still cool to see what genres were included the most. No surprise really that its action and platformers that dominate my list. There were some awesome action games out on the Mega Drive, and five of the 10 platformers are Sonic games. Beat ‘em ups were high in tally inclusion as well, which isn’t surprising either as there were some solid beat ‘em ups on the Mega Drive.  I wasn’t expecting so many racing games mind, but it goes to show that racing games were pretty good on the Mega Drive too. My favourite genre of game is the RPG, but, as mentioned a few times, the Mega Drive really didn’t do RPGs, hence the lack of tally in the list.

To conclude, the Mega Drive is one of the best consoles ever made, and it’ll always have a strong place in my heart. It was my first ever console, and it really opened my eyes to the beauty of video games. It changed my life, quite simply. I love the Mega Drive. One day, I’d love to own all 50 of these games, preferably in Mega Drive format (bar Columns III, Golden Axe III, Splatterhouse 3 and Gain Ground, which weren’t released on the Mega Drive in the UK). It’s a long-term ambition, one I’ll hopefully be able to achieve when I can afford to! Thank you so much for joining me in this countdown. I’ve had a blast doing this list; it’s always a pleasure doing these listings. I hope you got something out of it too. Until next time!

If you liked this article you might want to read: