I’m sure a lot of you would rate Golden Axe higher than the 30th best game on the Mega Drive. I suppose in an unbiased list I would put this game higher. I do really like the Golden Axe series, but I prefer other games, that’s all. One thing that’s not for dispute is how legendary this game is; only the Streets of Rage games can compare in the beat ‘em ups on the Mega Drive. And I don’t think they’ve ever beat the original, all three games are good but I think this one is simply the best.

Released: 1992
Genre: Fighting
Rating: ****
Best Moment: A bit of an odd one, but just booting the game up! I love the music and intro section, it’s perfectly done and it’s just so cool.

Well, what can I say about Mortal Kombat that hasn’t been said already? It’s just simply one of the best fighting game series of all time. Not bad for a Street Fighter ripoff huh? Mortal Kombat was so influential; it pretty much started horror and gore in video gaming. Not many games really did it, or at least, brought it to commercial gaming until Mortal Kombat did. But even taking the controversy away from the game, it’s still fantastic. The fighting was decent, the music absolutely brilliant, and the fatalities are just well, iconic. Mortal Kombat is a true classic. Released: 1993 (Never released in the UK)
Genre: Beat ‘em Up
Rating: ****
Best Moment: Putting on the Terror Mask and using your superpowers, it’s just really cool if not a little gruesome, or it by 1993 standards anyway!

Yes... I emulated this. How else could I play it? It was never released here in the UK. The Splatterhouse series was one I discovered only a good three years ago I’d say. They’re pretty good; combining horror and beat ‘em up elements made a great game. I’ve heard the Splatterhouse remake was pretty poor, but the three Splatterhouse games were all good, and the third was probably the best. Why? Because of two things; firstly the horror. This is a really horrific game, especially for back in 1993. Some of the things that can happen are pretty grim, and some of these things weren’t really done in such detail back at this time in video game history. And secondly, adding a time limit to every level anted up the panic levels somewhat. You really wanted to get to the end of each level in the time limit as you knew there would be horrible consequences if you failed. Splatterhouse 3 was a really awesome game, it really should be ported to the UK sometime in the future; I’d love to download it on Xbox Live Arcade! 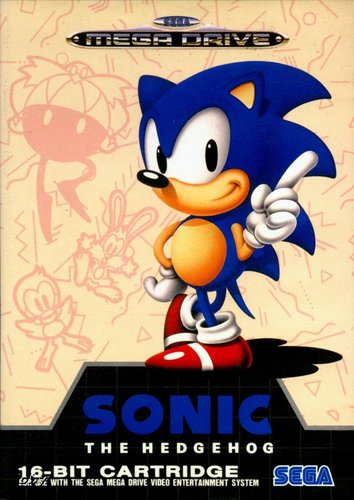 Released: 1991
Genre: Platform
Rating: ****
Best Moment: Believe it or not, getting a Chaos Emerald! They’re really hard to get in the first game, it’s always an accomplishment to be honest.

There will be mixed reactions to Sonic being only at #27. Some of you may not understand, while others will. If you don’t understand, there’s a very simple reason – Sonic got far better in its sequels. The original Sonic is a classic and it’s brilliant, don’t get me wrong, but if you’ve played any of the sequels on the Mega Drive it’s amazing how much better they are than the original. Sonic 1 is a great game however, hence the 4 star rating, and it did transform the platformer genre dramatically at the time, only to trump itself over and over again with its sequels. That’s my take on it anyway. One thing is for sure, is that Sonic 1 is a game you must play before you die. It’s still more than playable now, I still play it once in a while and it just never gets old.

Released: 1994
Genre: Simulation
Rating: ****
Best Moment: Building a full park, full of awesome rides and other bits and it being really full of customers... when business is really booming.

Do-do-do, do-do-do do do-do, do-do-do, do-do-do do do-do, do do-do do do... okay it’s not that fun writing that out but that tune really sticks in your head when you play this game... or even think of playing it! If you’ve played this game before I’m willing to bet money that the tune is in your head right now! Theme Park was awesome, it was such a different game at the time being a simulator, and a Theme Park simulator at that! It was just so awesome at the time, building your own Theme Park, and it felt quite realistic and ground breaking for its time. It’s a shame other versions of Theme Park did very little to add to the formula and only really updated the graphics, and the series has been pretty much lost to obscurity since. But it was still a great game, and is still good to put on once in a while!


We’re at the half way point now in the Top 50. Here’s a recap from #50 to #26...
Up to date? Cool. Well let’s start the second half of my countdown of my personal favourite Mega Drive games! 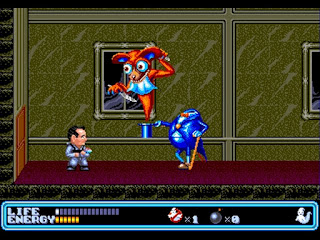 What a game Ghostbusters was. I don’t know anyone else that’s played this personally, the Mega Drive version of Ghostbusters was different to the more popular versions released on the NES and Game Boy, but I really liked this. Really liked it. It was quite a hard game but challenging enough to be more than enjoyable, and the different guns you can buy were a lot of fun. The levels were usually harder than the bosses, which were really entertaining to go against and were animated incredibly well. I’d highly recommend you play this. 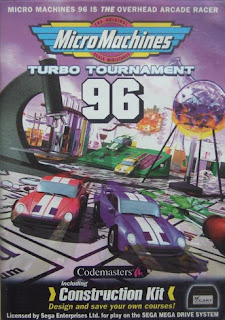 Released: 1995
Genre: Racing
Rating: ****1/4 stars
Best Moment: Constructing a really well designed track. I remember making a really awesome slippy slidey track that was tough as nails but was a lot of fun to race on. Released: 1994
Genre: FPS
Rating: ****1/4 stars
Best Moment: Destroying an armed plasma node at the end of a level, and getting back to the start of the level in the time limit given.  It gets harder and harder as the levels go on.

I don’t know how many of you have played Blood Shot, which was also known as Battle Frenzy. It’s a British FPS game. I don’t think you realise how rare that is. Not only is this a Mega Drive game that’s a first person shooter, but it was made in Britain. Not many FPS games existed at the time, and as Blood Shot goes, it’s a pretty damn good FPS. Some say that Doom was THE first person shooter for the early nineties, and I don’t dispute that. But Doom wasn’t a Mega Drive game. What was the best FPS for the Mega Drive? We got Blood Shot. Not as good, but it’s pretty solid, and well worth a play if you haven’t played it before.

Released: 1988 (1991 in the UK)
Genre: Racing
Rating: ****1/4 stars
Best Moment: When you approach a tough turning with three other motorbikes in front of you, and you take them all on in one go. It’s a difficult and risky manoeuvre. I never knew Super Hang-On was released in 1988, well even earlier, in 1987 if you include the Arcades. It’s a lot older than I realised, and it makes me respect the game that much more. Sure, there might be far more technical motorbike games out there. Road Rash for instance, combines the blueprint Super Hang-On brought forward, and added violence to the mayhem. But... I don’t think there was a motorbike game in the 16-bit era that replaced Super Hang-On. And this game came out in 1988, three years before the Mega Drive truly boomed as a force to be reckoned with, after Sonic made the console so attractive to video game makers. Even by 1996, when the console pretty much died, no motorbike game that was released since on the console replaced it. That’s eight glorious years of gaming. That’s impressive, and it shows you how good this game was. And is. I still play it once in a while, it’s still playable now. It’s just a great game; it just has to go down as one of the most important and best motorbike games ever made.

Released: 1994
Genre: Platform
Rating: ****1/4 stars
Best Moment: Hydrocity Zone Act 2. I named my Top 10 Platformer Levels of all time on this site (go here to read it) and that was rated at #1. It’s truly the best platformer level of all time; an absolute blitz of pace, beautiful scenery, awesome music and it epitomises what’s so amazing about the Sonic the Hedgehog series.

You may be equally as surprised to see Sonic 3 as low as it is as you may have been of how low Sonic 1 was. Why is Sonic 3 rated out of the Top 20? Well, as much as I love Sonic 3 (and trust me, I love Sonic 3) I prefer other Sonic games on the Mega Drive. Do you know what the main problem with Sonic 3 is? It’s too short. It’s the shortest Sonic game on the Mega Drive; it only has 12 levels. That’s just ridiculous really. And there are some awesome levels on here (Hydrocity as mentioned above being absolutely amazing) but is it really that good a game, when Sonic 2 and Sonic and Knuckles gave you far more bang for your buck? Sonic 3 as a game is truly incredible; it’s one of the best Mega Drive games ever. But it is just too damn short. Sorry.