Hallo everyone, it's unlikely I'll be able to get another retro review in until my computer is fixed, but here is my review on Final Fantasy XII, which I did in April 2008. It's possibly the last review I did, I can't remember doing one since. But as that was the highest vote tally in my first poll, I'll do my first proper review on this site as a video game review. To your right is four options of game review, choose which game you're most interested in. Anyway, onto the review.

"It has great qualities, but it’s just when you compare it to the storytelling of previous games, it’s just disappointing." 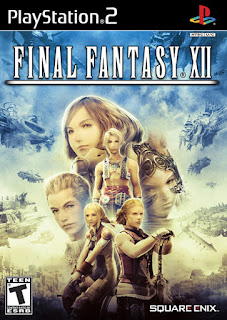 It's hard to review this game and give it a rating because as everyone who knows me is aware I adore this series with a passion. But, it's a disappointment. I asked my girlfriend, “What would you rating FF12?” She replied, “6 or 7 at the most.” But I gave it an eight, because it's not a bad game. Not by far. It's a great game in fact, but when you put it up on the wall next to Final Fantasy VI, VII and IX it really does not shine out.


The game is set in a world called Ivalice, the world of Final Fantasy Tactics, where the main character Vaan and his childhood friend Penelo dream get caught in a war between Archadia and Rozarria, two nations where the battlefield is about to be set in their kingdom of Dalmasca which was taken over by Archadia two years prior the beginning of the game. Ashe, the princess of Dalmasca and Basch both thought to have died two years ago eventually join forces and create a resistance movement against Archadia. Balthier and Fran are sky pirates along with Vaan and Penelo who get caught in the resistance movement. That's… pretty much the storyline. It's not great to be honest, and when you compare it to some of the others, it's as brief as comparing the Saw series to Cabin Fever. I mean, when people ask me to describe Final Fantasy VII's storyline, I gasp and say “Well… it's complicated.”


The graphics on the game are absolutely fantastic, there are no glitches no patches and they are as smooth as can be – it gives the Playstation 3 a run for its money. There is a small load scene between FMV's and the action but apart from that the scenes move smoothly. The best word to use here as you have probably already noticed is smooth. There is some gorgeous scenery in the game, especially in the latter stages of the game.


The sound is great – the voice acting is better than Final Fantasy X's and the soundtrack is decent. Once again if you compare it to some of the soundtracks of the other series then it stands out as pretty bad.


When it comes to replay value, something that the Final Fantasy series masters, it's not bad. I mean there is actually only one really, which is disappointing. It's called “Mark Hunting” which is basically hunting a monster that is pestering people in the game, they get harder and harder and eventually you go against some of the hardest monsters in the game. There is no “Blitzball” or “Card Game” like in the other series which is disappointing. Even the smaller side quests don't offer much.


The main thing I would like to talk about is the battle system. Ever since Final Fantasy IX the people at Squaresoft/Square Enix believed they had to change the battle system. In the old series, there was an ATB gauge, and until it fills up the characters stand still and do nothing. In Final Fantasy X they got rid of the ATB gauge which made the game flow much more. In X-2 they brought it back but instead got rid of all the waiting and delays and made the fighting flow even more. Final Fantasy XII works in exactly the same way but you can control the character in a 3D environment rather than in a set screen battle like the other games. The world map and battlefield is the same field this time around, the monsters can be seen as you scroll across the deserts, mountains and plains you go through. This sounds like a vast improvement doesn't it? My only problem is, the original way of fighting in the Final Fantasy series was not a problem whatsoever in the first place. I have no idea why Squarsoft/Square Enix think they need to improve the battle system. I've never seen anyone complain about it. Yes it has gotten mocked over time but games do! How many games in the past have got mocked but have kept the system the same over time? Game Developers always think they need to improve the game if it gets mocked, mainly games that contain scrolling or 2D graphics. Sonic went downhill and only makes one or two decent games every five years now because they tried to go 3D – Mario as good as their 3D games are no match for 2D Mario.


The Final Fantasy series has not been “great” since Final Fantasy IX, and this game follows that trend. Look how much time has past since Final Fantasy X – six years nearly? Six years and they make a tolerable but simple storyline with an improved battle system. It really isn't good enough. Where is the plot is twist? The complex storyline? The dark/hidden side of the main protagonist? The great female counterpart? The sick but great villain? The scenes that make you want to cry, that get you hooked on the game? There is nothing. Oh, but the battle system is good and improved. So for the past six years they think that all these things are best to be sacrificed in order to get a super battle system. Also, the storyline is so basic, they make you travel the whole world and stretch out the small storyline by making you have hours of battles in between. Basically, you go to one place which is all the way across the world, fight loads of monsters for hours, get there, beat the boss and *Insert story progression here*. And repeat. It's not good enough. Vaan, supposedly the main protagonist has nothing to do with the storyline, nothing, well he lives where the Archadian army took over. That's it. There's no love story, the villain is disappointing, Penelo is just annoying. The best qualities this game has, is Balthier, the awesome sky pirate who is arrogant, witty and sounds like David Bowie, it's fantastic! The graphics are great the battle system is good too. That's about it.


As you can tell judging on this review I should be giving it less than 8/10 but it is a good game. It has great qualities. All the series does. But it's just when you compare it to its great history of storytelling, it's just disappointing.


Overall: 8/10
I do maintain the opinion that FF12 is just a shadow on the Final Fantasy games around it, Final Fantasy 13 is a much better game, although I'm yet to complete it, so can't do a full review on it. I'll hopefully be doing a review in the next fortnight, we'll see how fortune works in my favour first. Have a good day.
For the latest updates on my work, follow me on Facebook and Twitter here!