Happy New Year people. For the last three years I've been calculating all my play counts on my personal media player, to see what songs I listen to the most. And then at the start of the next year I reveal what the 100 most listened to songs were that year. Last year I revealed The Mercyside 100 2014 and before that I did The Mercyside 100 2013, click on those if you're interested in what I played most on those years.

This year I did The Mercyside 100 2015. Unfortunately, I'm not going to be able to do DJ shows of these songs. One of the reasons why is because I'm having problems with my computer at the moment, sound wise. The main reason however, without revealing too much, is because there's a lot of entries in this list by a certain band called Slaves. Slaves are by far my favourite band at the moment and unfortunately, Mixcloud won't allow you to play more than three songs by one artist in the same show. And that means it's difficult, because, well, they appear a lot.

I was going to make this into a playlist on YouTube but I can't do that either, because certain songs are not on YouTube which is frustrating.

So, in reverse order, here are is The Mercyside 100 2015! These are 100 songs I played more than anything else last year. 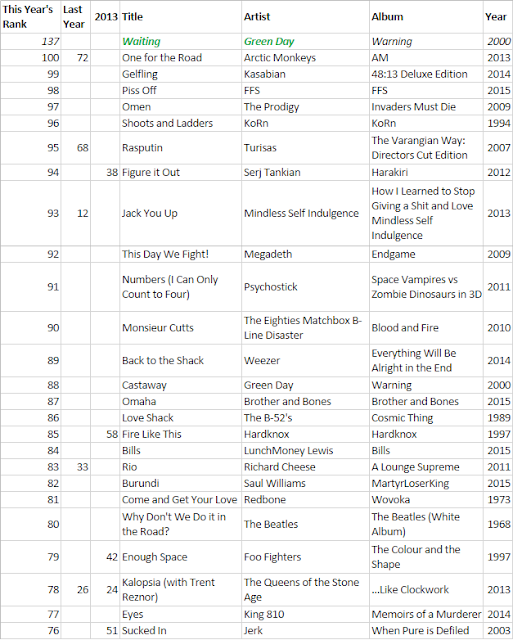 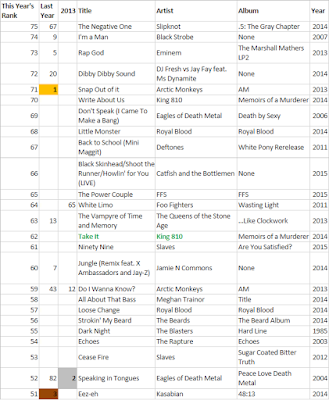 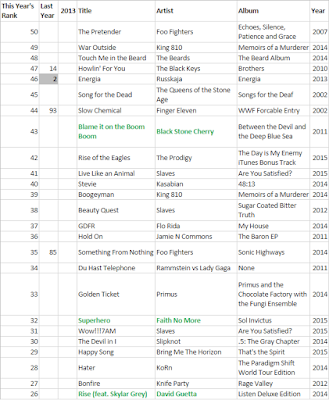 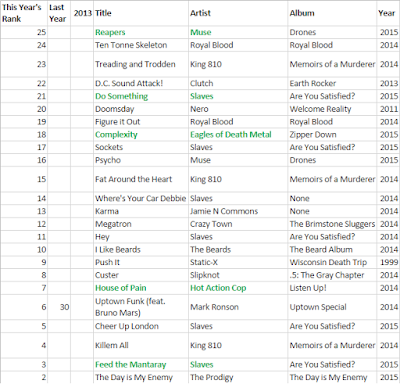 So, what was the most played song of the year for me? Here it is...

So there we go! I hope you find some interesting entries in here, and if so, check them out on Youtube if you can, most of the songs are easily available on there. And if you don't like the band Slaves then this list clearly isn't for you! If there's something on this list you've not heard before and you end up really liking, let me know, comment below! I'd be happy to have gotten you into a song or an artist you've not heard before!

"Green text"
If you don't listen to The Mercy Side, my radio shows which you can find on Mixcloud, then you may not know that I reveal every month what was my "Song of the Month". Basically, those tracks where played more than any other track, on a particular month of 2015. Here's the list in order, with Youtube links attached:

If it confuses you why I added "Waiting" by Green Day at the start of my Top 100 reveal despite it not actually being one of the 100 most played songs last year, hopefully it makes more sense now - it was "Song of the Month" for October.

Here's some charts showing you how often songs appeared by the year, or decade... 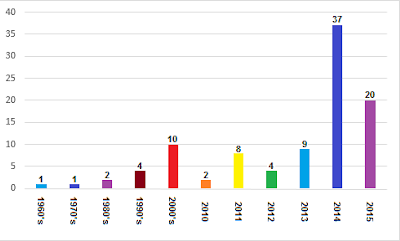 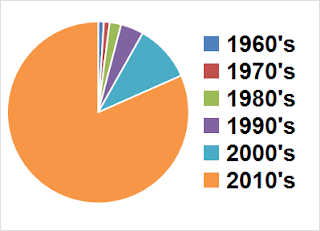 Also, if you're interested, 46 songs on this list were not singles, which means that 54 of them were!

So I'm listening to less "older" music now than I have been in the previous two years doing this list. That's 80% by the way, from the last half decade.

Also, considering I haven't mentioned them once yet, I have to honour King 810, another one of my new favourite bands. Seriously, check them out, they're the best new metal band out there, in my opinion. Think Slipknot meshed with KoRn, which is no coincidence, because that's how I discovered them, by seeing both Slipknot and KoRn last year! Great band, checkem out!!

Well that's it from me at the moment, I'll be back very soon with another website project! All the best and thanks for reading!