Hi everyone, it's me again with another Marilyn Manson post!

It's actually the 20 year anniversary of "Mechanical Animals", one of Manson's finest records. It doesn't get the same attention "Antichrist Superstar" does, but that takes nothing away about how truly incredible the album is. When people ask me what my favourite albums of all time are, I always say "The Downward Spiral" by Nine Inch Nails, "Antichrist Superstar" and "Mechanical Animals". It's truly a masterpiece. I did a review on the album when I was around 14 years old, it's a bit embarrassing looking at it now but if you do want to read it, it's archived on this website here.

On the topic of old posts, last year I listed my Top 15 Marilyn Manson cover versions if you want to read that, click here. 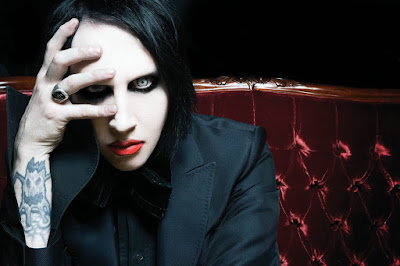 Anyway, digressing. So today I'm posting something I came up with nearly a year ago actually. When Manson was releasing "Heaven Upside Down", I had a thought. I wondered, will Marilyn Manson create a second "Greatest Hits" style album?

The reason behind this is pretty simple. Manson's last album was his tenth album. When he released his fifth album, he released "Lest We Forget: The Best Of", which is pretty much a "Greatest Hits" album of, what is now, half of his career, album-wise. So it does beg the question, will Manson consider making a "Best of Vol 2"?

There is a strong possibility that Manson may not make this album. Why? Because, as much as it might hurt some hardcore fans to admit, Manson's last five albums aren't even close to being on par with his first five. Even is Manson does consider doing a compilation album, he may not even do a "Best of Vol 2", he might actually do an actual "Greatest Hits" album, which may or may not be 2 CDs and may feature predominantly songs from the peak of his career. But, regardless of if it happens or not, if it's a "Vol 2" or an all-round "Greatest Hits" or not, it got me thinking, if "Vol 2" did come out, what would it look like?

I did a bit of thinking and a bit of number crunching. "Vol 1" was 20 songs, so I wanted "Vol 2" to also be 20 songs. It is harder than you'd think as well to predict a "Vol 2", because Manson hasn't even released 20 singles off 5 albums. He's released 9. So then I had to think, well what songs off each album that were not singles would feature? What songs were played live more than others? What songs had music videos despite not being singles? What albums are even "better" or "more popular"? Would he release a single to promote the album, like he did with "Personal Jesus" and "Vol 1"? He's recently released a cover version of "Cry Little Sister" and to my knowledge it's actually a music single. So believe it or not, it wasn't the easiest project.

But I gave it my best shot, and this is what I came up with:

Album colour codes:
Eat Me, Drink Me
The High End of Low
Born Villain
The Pale Emperor
Heaven Upside Down

I've played it from start to finish a few times in the last few months and it does play quite well. I do take pride in my track listing orders so I believe, again, in my prediction, that if he were to release "Vol 2", it may play similar to this.

I've actually made it into a Playlist on YouTube and Spotify, click below if you want to hear it on those platforms:

So what do you guys think? Comment below! Thanks for your time!