Noughtie: The 100 Most Important Songs of the Decade (Part 10)

Finally. After more than three months of daily listing, we're arrived at the Top 10. I'm personally proud of this project, I hope you enjoyed reading it if you've been following it since the beginning. Let's do this!

I pissed off a lot of people with my statement that Nickelback are the Most Important Artist of the Decade. It's not a statement I like to say, but they've had a huge amount of success consistently throughout the decade. Like it or lump it, but it's a fact. It says something about the strength of the band if you take into perspective that this song was the fifth single off the album. It wasn't going to be released in this country but after a surge of interest from the country on the internet they took the punt to release it. It ended up being their biggest chart success to date. And it still is. This song remained in the UK charts for most of 2007 and 2008. It was in the Top 40 for a total of 35 weeks. It was in the Top 75 for 50 weeks in a row, only 22 songs have been in the Top 75 for a longer period of time, and most of those aren't modern releases. That's the strength of the song. Want more proof? How about the fact that after the HUGE success of this song, the album "All the Right Reasons", the sales went up 250% in the end. That's indefinite proof. Not happy about Nickelback being a huge band, with huge singles and huge success? Me neither, but I 'aint going to lie to you about it.

Similar to "Rockstar" above, this song slowly crept through the charts before eventually peaking very high and then slowly going back down. Granted, it didn't stay in the charts for as long as "Rockstar" did, but the song was incredibly popular throughout 2009 and 2010. The main difference between the songs as well is that this song was over huge with critics, where as some critics have a huge distaste for Nickelback (me included). "You've Got the Love" is the highest up cover version on this list, so in a way, you can say this is the most important cover version in the decade (although you can also give that accolade to Johnny Cash and "Hurt"). This was a beautiful song, sung incredibly by Florence Welch and she completely made the song hers (the original if you didn't know was by The Source and Candi Nation in 1986). I am almost convinced this song will remaintain its popularity throughout this and other decades as one of the finest songs to come out from the last decade. What a decade the Arctic Monkeys have had. They started their career in 2002 and in four years, became the most hyped British band since Oasis. And while they haven't maintained their success like Oasis did, their music quality is arguably better. The Arctic Monkeys are just one of those bands that deserve everything they get, they make great indie music, they are good live, they are genuinely a nice group and critics and fans love them. But no song they have released represent them like this one. "I Bet That You Look Good on the Dance Floor" became an instant classic. It didn't come out of nowhere, it was built up for weeks and then released, but the sound of the song was so genuine, so, ahem, British, it just had everything in it that a general British public wanted. It's a simple yet brilliant song, and it'll easily live on forever as a defining moment in the decade.

I'm sure there are going to be people absolutely ripping me for putting this so high in this listing. As I said, this isn't a personal listing, it's an unbiased one. And like it or not, this song was fucking huge in this country, and in Ireland. It's Limp Bizkit's most popular song. It's a song that arguably defines the rap/rock/metal era from the early Naughties. White guys rapping over metal music, thinking incredibly high of themselves. It's a genre that at the times the adults hate, and a lot of teenagers loved at the time, but feel embarrassed about now thinking about it. Not me in particular, I don't have any shame saying I liked Limp Bizkit's old stuff. This was a catchy track. And it was really over in this country. And you still see it get played more than any other nu-metal track from the era today. I just speak the truth, if you like it or not. Beautiful. It's the best word to describe this song. Frustratingly so, because at one point or another, this song wouldn't go away. It was everywhere, on the radio, and in every single fucking sporting broadcast around. But let's not retract that away from how awesome this song is. This song really is a masterpiece. It's just an incredibly moving song. And no, it didn't chart well, but the song maintained its popularity for a long time, just in case you didn't know, it's ONE HUNDRED AND FORTY FUCKING SIX WEEKS, and counting, in the Top 100 right now. That's an amazing feat. Yet, the song has never peaked higher than #35, which is a damn shame. Regardless, this song more than deserves a place this high in the listing, I'm willing to put a lot of money on the fact that this song will be considered a highlight of the decade.

I read somewhere around 2 or 3 years ago that "Hey Ya" is the most played song on the radio in the decade. Frustratingly, I can't find evidence of that at the moment so take this information with a pinch of salt. Regardless if that information is true, you can't deny how big this song was, and is. It's a hip hop classic. You can put this song up there with the great hip hop songs of the nineties and eighties and seriously, it won't look out of place. It's genuinely one of the best song ever made. OutKast will never have a finer moment, much to Big Boi's disappointment I'm sure, as Andre 3000 cracked the world with this masterpiece. The video, the lyrics, the beat, everything is just brilliant. It's funny how "Shake it like a Polaroid picture" is potentially responsible for the revival of the retro camera. I can't say I've heard one person dislike this song (although I'm sure someone will prove me wrong now). "Hey Ya!" will forever be known as one of the best hip hop tracks of all time, it's that simple. This song was released in America on 6/6/6 so it must be EVVIIIIIIILL!! Okay seriously though, what a remarkable song this was. I mean, it's not my thing, I don't like it, but you'd be a fool not to understand why this song got put into so popular. I swear this film was in like EVERY romcom around at the time but when I did my research I can't find it being listed in many romcoms which is embarrassing. Regardless the song wouldn't go away, it was everywhere, because of its gentle tune and it's romantic lyrics. The video was also a reason. You can also thank "Grays Anatomy" for that too, the song shot up in popularity afterwards, particularly in the US. In fact, the song was STILL in the UK Top 100 this year, that's five years! I think it's last activity in the Top 100 UK singles was March mind. But yeah, that's longevity for you, it's quite obvious this song isn't going anywhere, you will hear it for years to come, as one of the most romantic songs ever to grace our ears. If you like it or not! Yep. Nickelback at #3. I think there's three songs that stand out in the decade, and that are guaranteed to be played forever, or however long music will be a form of entertainent. And like it or not, this is one of them. "How You Remind Me", despite being nearly 10 years old this month in terms of release date, still gets an incredible amount of airplay today. It was such a strong hit for the band, and despite "Rockstar" getting a lot of airplay as well, this song is probably untouchable in terms of its impact on the music scene. It won a Grammy award two years after its release, which is bizarre, but at the same time it shows that even two years after release the song was still played, still important and still worthy of winning such a prestigious award. "How  You Remind Me", regardless if you like the song or not, is just untouchable as a song that will be associated with the 10 years of music I'm covering at the moment. And that's why it's third in my list of most important songs from this decade. 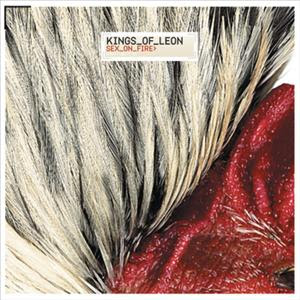 Surely there should be no surprise about this entry. It had to go in really. It's the biggest hit in history in the UK on downloads alone. The song got to #1 on downloads before it was physically released. The song has spent an amazingly long time in the Top 100, it's not long dropped out actually.

Truth is, I was really going to put this down as my #1. It was a difficult choice between this and the song you'll see posted tomorrow. Chart success, this wins, hands down. Probably in terms of how much it will be played in ten years time from now in comparison to my #1, it'll probably win in that 'battle'. But there's a significance to tomorrow's track that this lacks. And if I said what it is now, you'll have a good idea what that is. So I'll shut up about that song now.
Who would have anticipated that Kings of Leon would get a #1 hit eight years ago? I wouldn't have. They've come a long way to being one of the most loved rock bands of the moment. The song itself isn't the best song in the world, I prefer a lot of their older stuff. But there's an appeal to this song that bodes very well with the general public, it's got to be the simple yet memorable guitar, the simple yet memorable chorus and the simple yet memorable video. "Sex on Fire" will forever live as an important song of the decade, it was the song that Kings of Leon will always be known for.