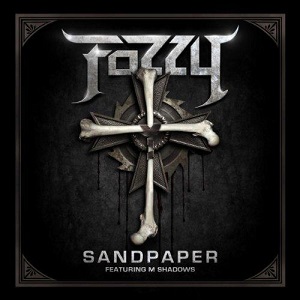 If you know me personally, I'm a massive wrestling fan. And Chris Jericho (along with The Undertaker) is my favourite wrestler of all time. Now while I respect Chris Jericho for fulfilling his other passion in life which is music, and forming a metal band with himself as lead singer, it doesn't mean that I love his music as much as I love his wrestling ability. That's not to say Fozzy are a bad band at all and Chris Jericho is a bad singer, quite the opposite. It's just that they're not really my "thing".

But "Sandpaper" is a cracking tune. With a massive assist from M. Shadows, the lead singer of Avenged Sevenfold, Chris Jericho and co. make a great step forward in this song from their early days of a novelty parody metal cover band to starting to carve a good name in the metal genre for themselves. Sure the music video is cheesy, but this song kicks some serious ass and deserves your attention. If you've not heard Fozzy before and want to see what Chris Jericho is like as a metal rockstar, give this track a listen. If you're a fan of Avenged Sevenfold and you've not heard this song, you have nothing to lose either because you'll probably like it too. Basically, just listen to the damn song!!

Here's the video if you want to hear it!