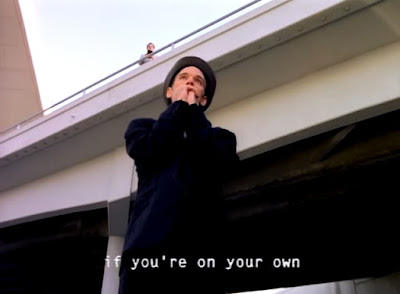 There's one thing that baffles me and that's how underappreciated this video is. It's a truly brilliant video. Yet it's not often, if ever, featured on any major listings across the music industry at all. It baffles me. It's a very famous video, a very famous song and while the song itself does get good attention for its fascinating self-help lyrics, this accompanying video doesn't get the recognition it deserves.

Basically there's a massive traffic jam and the video concentrates on all of these people stuck in their cars and it displays their thoughts and feelings in subtitles. There's people of all ages and backgrounds, all thinking about a variety of different topics; one is wondering why God isn't answering his prayers, another is mentally shouting at their dad to stop singing badly in the car.

At the end of the video, the band, who are in a car of their own, thinking the lyrics of the song, get out of the car and walk out. The words "so hold on, hold on", are actually not thought but are said out loud, and it inspires the entire crowd of people stuck in traffic to be strong about their problems and tackle them head on. This metaphorical of course; the leaving their traffic jams and walking away from their cars is the image that represents this.

I just love this video, it's truly a powerful song and they needed a video to relay the message as well as it could. And I totally think R.E.M. nailed that message head on with this video. I just wish other people agreed with me, and appreciated this video more. It would (and should) be featured on more of these "best music videos of all time" lists.
Note: This is the first and last video from the year 1993 in this list. 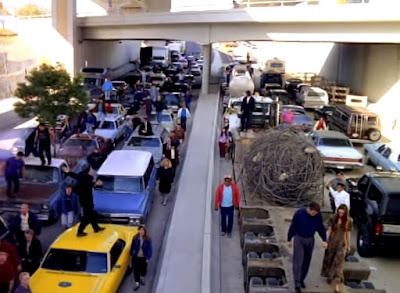