#34: "Paranoid Android" - Radiohead
Release Date: 1997
Director: Magnus Carlsson
Fun Fact: The two kids in the video are actually the main characters in a TV show called "Robin", which the direct Magnus Carlsson created, and it was often on Channel 4 back in the day! 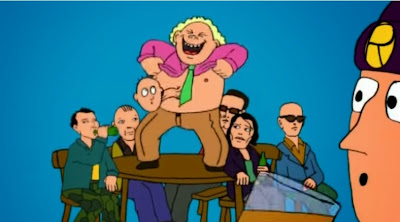 This video is incredibly bizarre and has some pretty funny moments as well, but in truth it's just a fantastic video that you can't help but watch from start to end. So much happens in this video, and it's all mental; the main character Robin was daydreaming the whole events of the video while listening to "Paranoid Android" on repeat for 12 hours!

There's so much to take in while watching the video, there's the fact that Robin and his best friend Benjamin visit a prostitute, get bullied in a bar, before Robin decides to climb up a lampost and reminisce (similar to how he's actually daydreaming the whole thing). A member of the European Union tries to get him off the lampost by stripping down into a spike thong and a mask? Yeah bizarre I know. He goes on a mini adventure with an angel in a helicopter and plays ping-pong tennis. I'll just shut up. It's just a damn good video that plays to the frenetic song that is, "Paranoid Android". Watch the video!

Be warned of the cartoon nudity in the video! 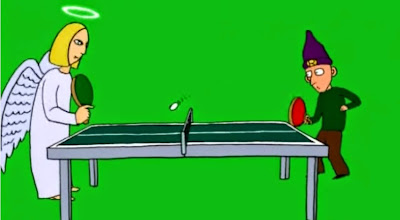