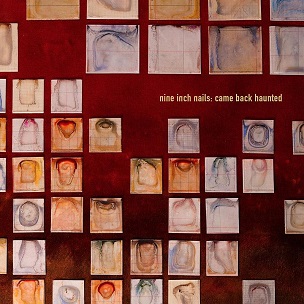 You would think with Nine Inch Nails being my favourite band and with them only releasing the one album in the time frame we're covering that that all three singles would hit the Top 100 and be quite high. Unfortunately this isn't the case - this is the only song of the three singles off Hesitation Marks to his this chart and it didn't even hit the Top 50.

Don't get me wrong "Came Back Haunted" is a great track. "Copy of A" is okay and "Everything" is... actually the worst music single Nine Inch Nails have ever released. Truth is, "Hesitation Marks" is by far my least favourite NIN album. Yes, even worse than "Pretty Hate Machine" and "The Slip". I actually did an album review of "Hesitation Marks" for this website, complete, but I didn't post it for a few reasons. I can't be bothered going into why, ask me on Facebook sometime and I might give you an answer.

Sorry I'm being so negative. Anyway, as a song and as a music single "Came Back Haunted" is fine. It's great even. It grew on me slowly but surely and in the end became one of my most played songs of 2013. I can't say it's a classic NIN track but it's a good one. It doesn't do anything different or spectacular than most NIN tracks though. But it's what Trent Reznor and Nine Inch Nails does best, all crammed into a music single. It felt like a celebration and homage to what NIN's music has become. It's just a very good song, if unspectacular.